One family.
One damn good story.

It’s a story of hard work, commitment and perseverance. It’s one we’re proud of. And one you can be part of. 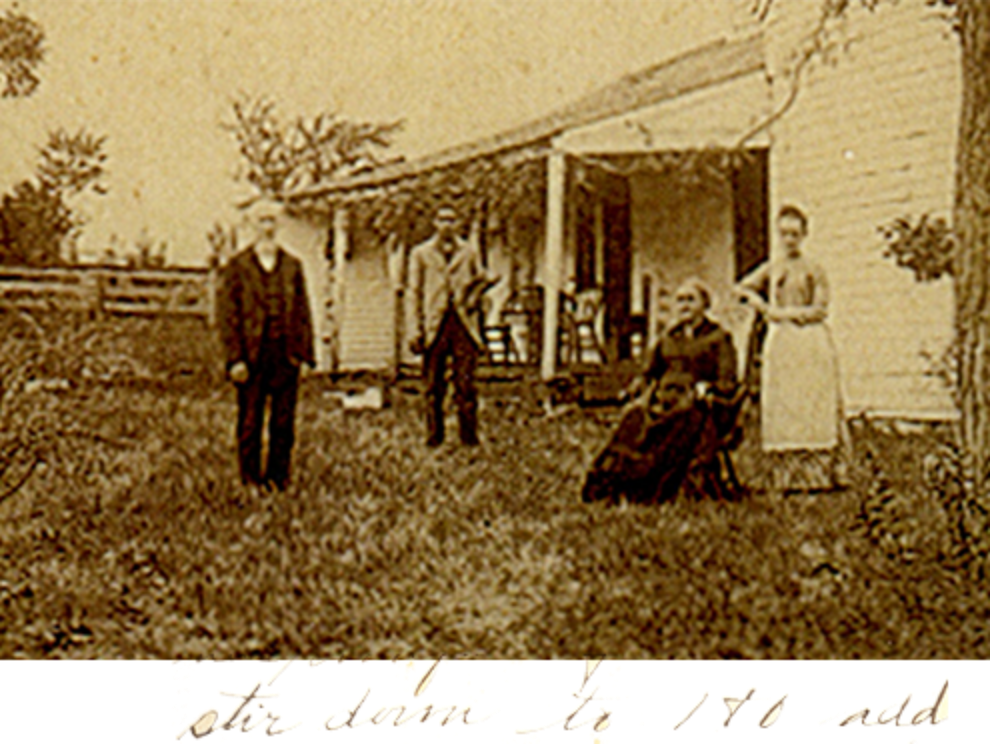 Humble beginningswith no end in sight.

Known as a man of sterling worth and integrity, Jacob Beam was a farmer, miller and pioneer. In the 1780s, he strapped his wooden whiskey still to his back and moved his family west to the foothills of Kentucky before it was yet a state. The journey took more than three years, but it would be well worth it. Turns out rich Kentucky soil is perfect for growing corn, so his farm had more than enough of it. He used the excess corn to make whiskey, which would be the start of a bourbon dynasty. He sold his first batch straight from the barrel in 1795 and the rest is history. 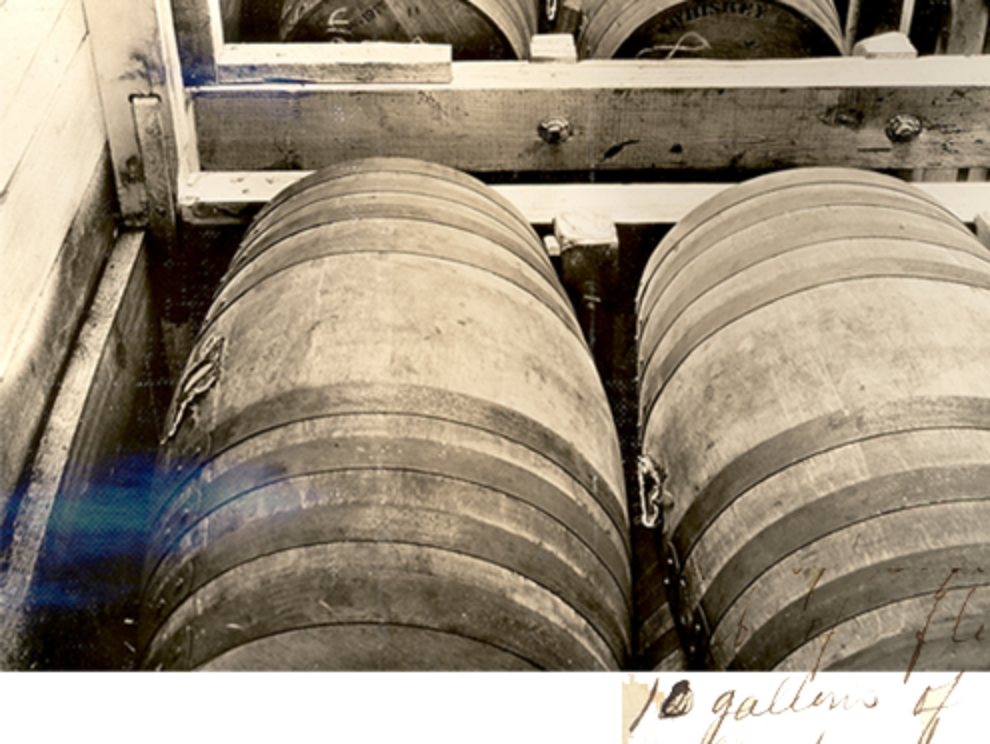 Jacob’s son, David, was the 10th of 12 children. An adept and skilled whiskey distiller, he took over the family business when he was just 18 years old. In 1830, amidst great industrial change, David decided to expand the family distillery and increase the production capacity. Skillfully navigating advances in technology and transportation, he was able to capitalize on the burgeoning demand for bourbon during the 1830s-40s. 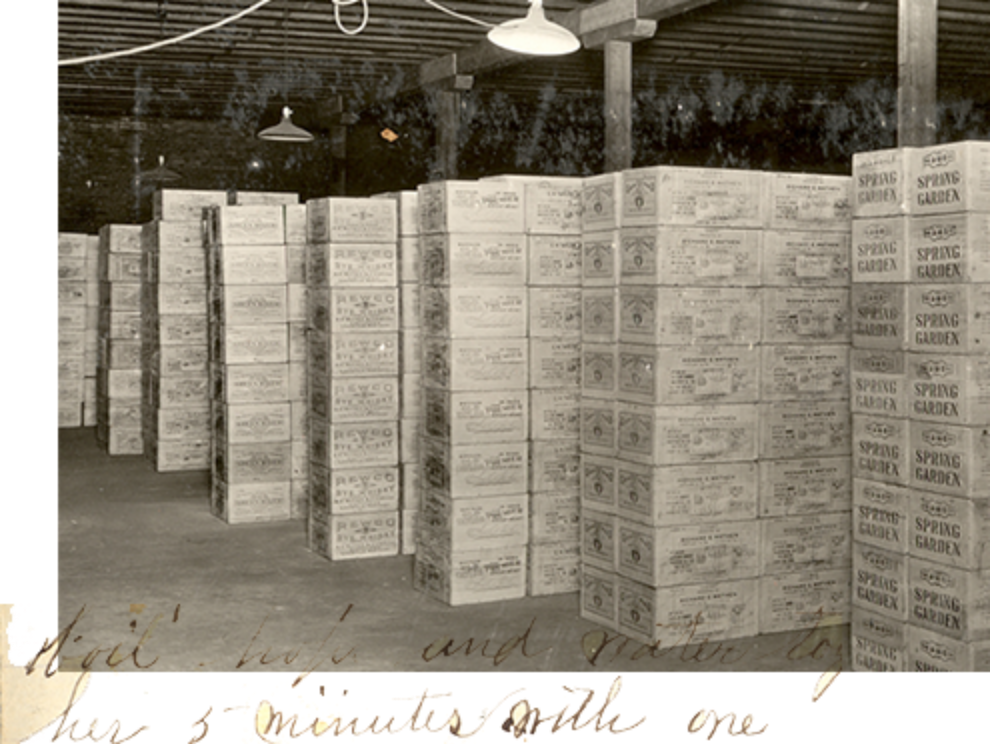 Kentucky perseveranceshipped around the country.

As David Beam’s son and the family’s third generation distiller, David M. instilled hard work at the distillery. And it’s a good thing, because the country was headed for war and it was going to take a lot to persevere through it. He navigated the uncertainty of the times by upgrading and then moving the distillery to Nelson County, just a few yards from railroad lines for more reliable shipping. There, the Beam’s Old Tub whiskey could be delivered north-to-south, giving it a national following. Many distilleries shut their doors during these years. But the Beams came through ready to grow beyond expectations. 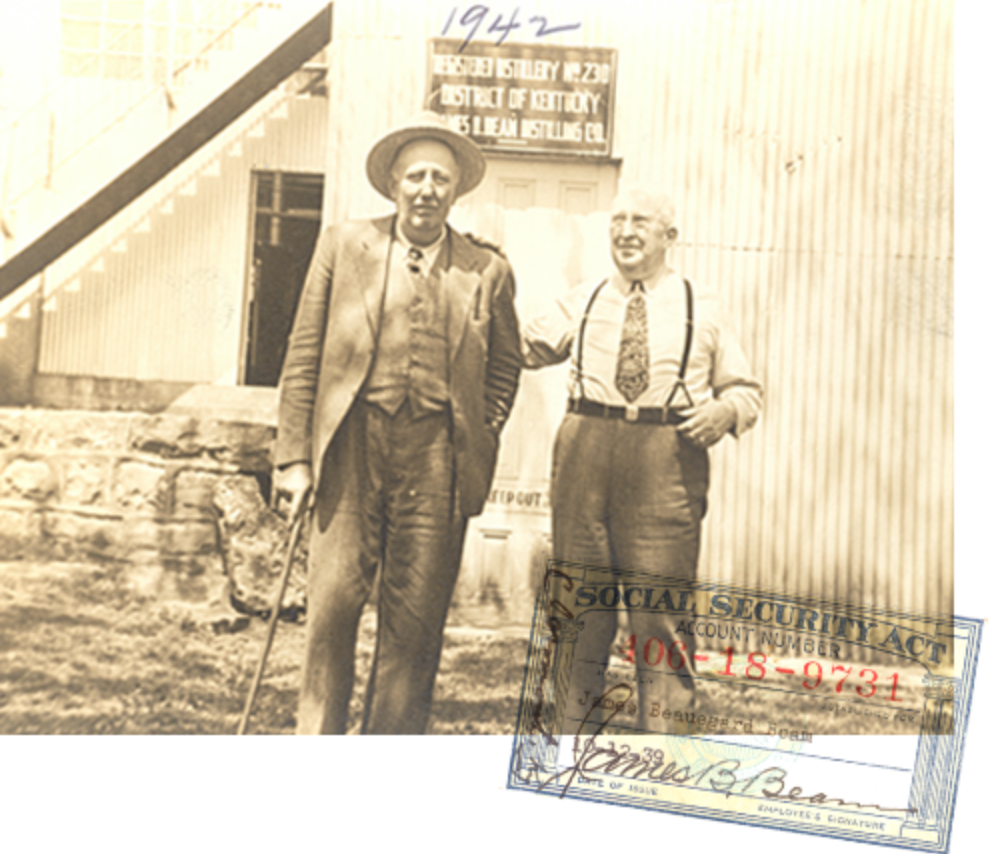 Genuine. Like the bourbonhe made and the legacy he left.

David M. passed the bourbon dynasty on to his youngest son, James Beauregard Beam, a decision that would prove defining to this day. Personable, but to the point, Jim Beam liked to keep things simple. He would “wince anytime someone called him James” and gently correct them. This kind of direct, honest approach and a deep sense of integrity were his guiding lights as he transformed not only the family’s regional distillery, but the entire bourbon industry. After Prohibition ended in 1933, he recreated the famous family yeast, the very one we use to make our bourbons to this day. With it, he went on to rebuild the business in just 120 days at the age of 70. It was called the James B. Distilling Company. And its founder’s principles and legacy endure to this day. 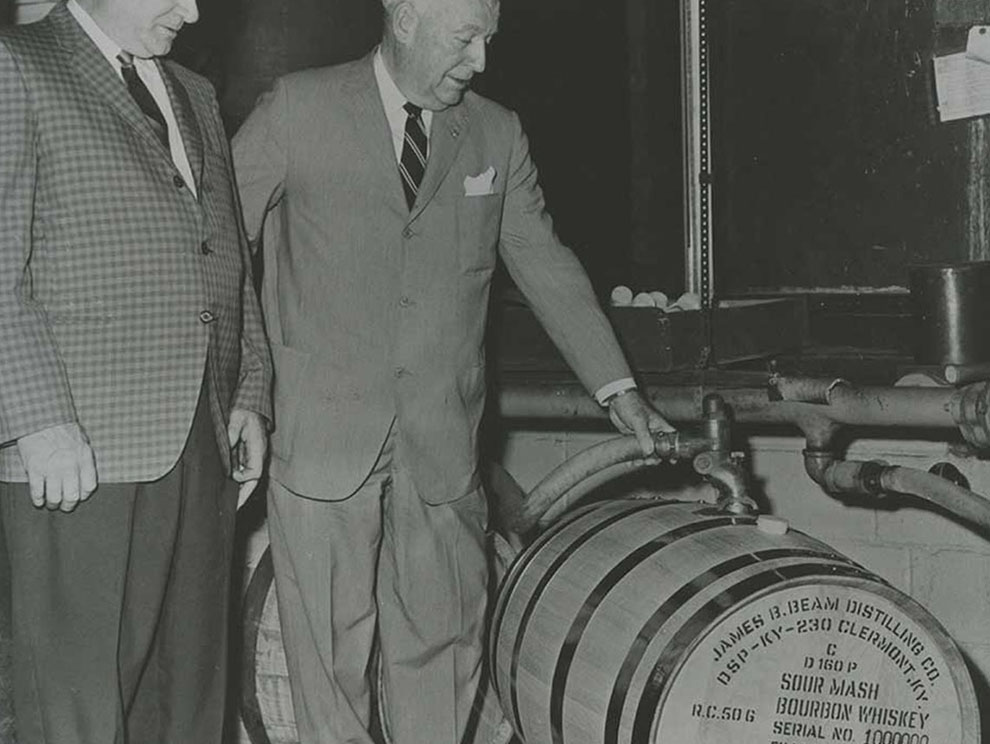 Bringing a warm Kentuckywelcome to the world.

Jere loved many things, but especially his family, his family’s bourbon and his Cadillac. Personable and straightforward like his father Jim Beam, he helped guide the company through Prohibition and two world wars. He led construction of the new distillery in Bullitt County, KY, where he moved into an old boarding house on the grounds. The home still bears his name today and lives on the National Register of Historic Places. Despite the wars overseas, he made trips abroad, introducing the Beam name to Europe and beyond. Because of Jere, the world was introduced to what would become the world’s #1 bourbon. 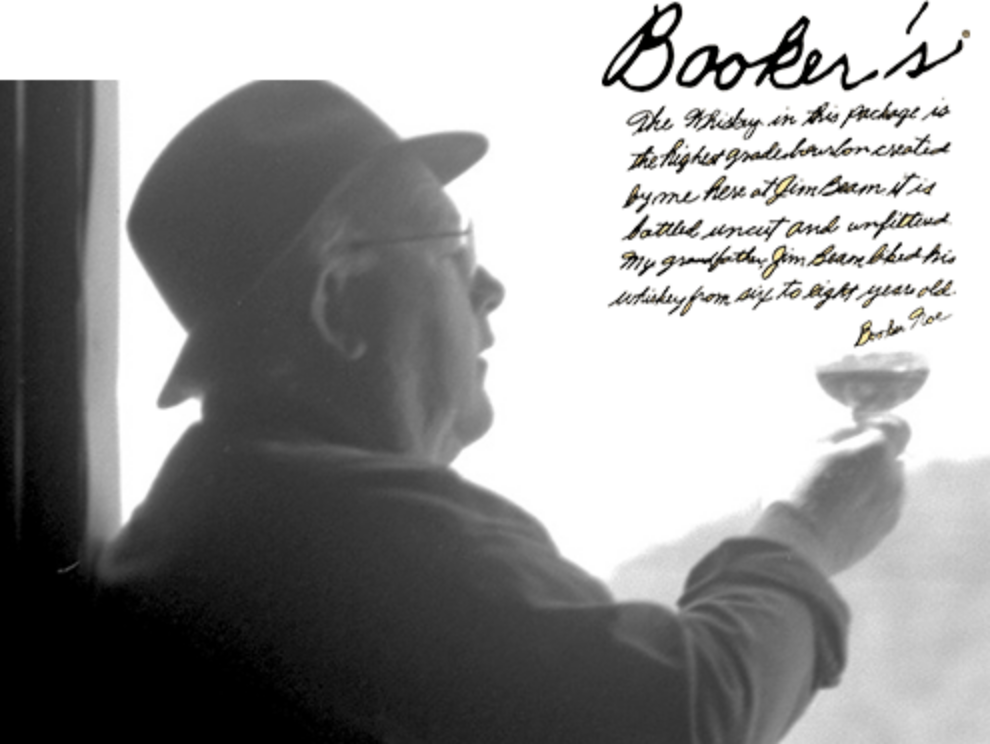 A man like none otherwith a vision unlike any before.

A tinkerer. A storyteller. A Kentucky charmer. Frederick “Booker” Noe was many things, but most of all he was a man of vision and conviction. Since T. Jeremiah didn’t have children, he brought on his nephew, Booker, to become the first Beam master distiller with the last name Noe. Turns out he could make bourbon with the best of ‘em. Booker was never a man who stopped short. He always pushed ahead. He tweaked and tinkered until his bourbons stood up to his standards. He experimented with the distilling equipment and found the “sweet spots” in the rackhouse that created the best tasting bourbons. He started bottling his discoveries, sharing them first with friends and family and, eventually, the world. Booker’s “Small Batch Collection” would go on to include Basil Hayden’s, Knob Creek, Booker’s and Baker’s. It would revolutionize the industry and make a place for Booker in the bourbon history books. 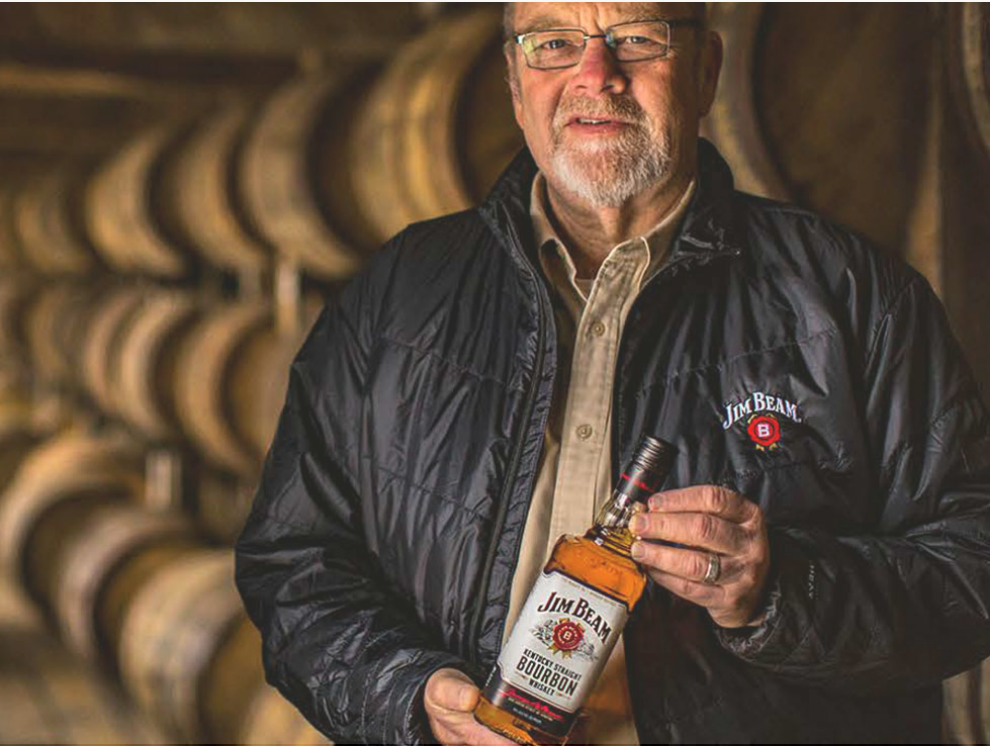 Commitment. Integrity.Everything from our past made present.

“If you do something long enough like we have, eventually you’ll reach your goal. Then it’s time to set a new one.” That’s what current Jim Beam master distiller Fred Noe wrote in his book. And it’s what he lives by every day at the distillery. After his dad, Booker, pioneered Small Batch bourbon, Fred took it to entirely new places. He introduced Knob Creek to a global audience and grew the Jim Beam brand with new releases like Jim Beam Double Oak and Devil’s Cut. In nearly 30 years of distilling, Fred has surpassed many goals with only more to come. 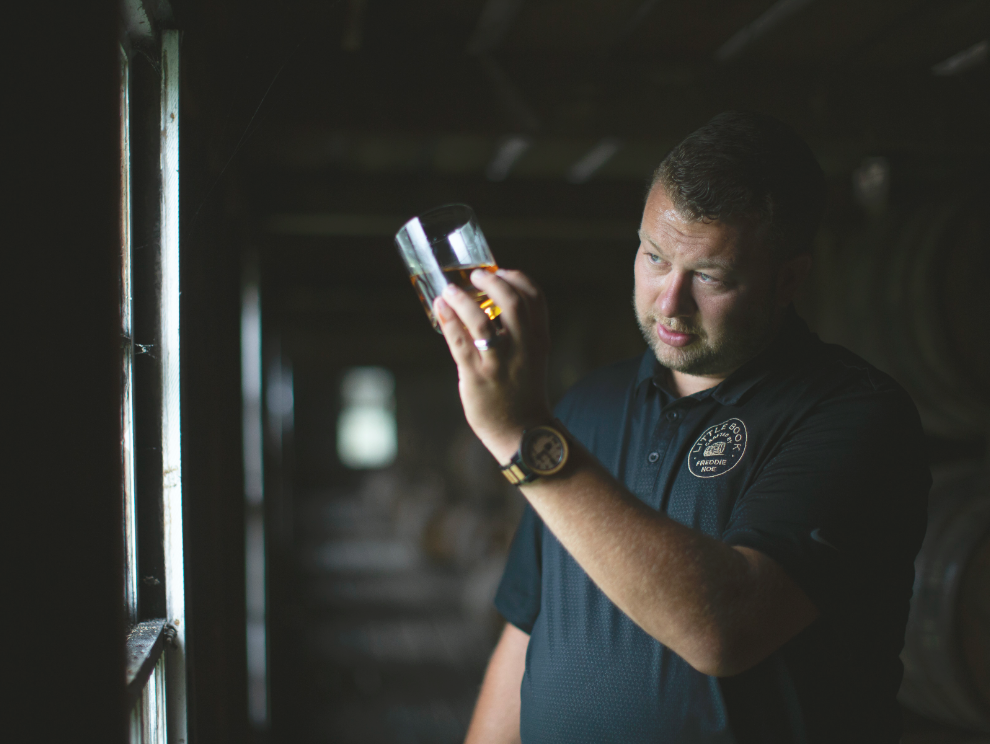 When the fabled Beam family ambition meets inventive curiosity, you’re sure to get something special. Freddie Noe has quickly become known as a true original distiller. Like his dad Fred and his grandaddy Booker, he’s breaking new ground in the world of bourbon and American Whiskey. Booker gave his grandson the nickname “Little Book”, which would become the namesake of Freddie’s first project. Earning national acclaim in 2017, each new edition of Little Book whiskey has been breakthrough and sought after. In 2019, Freddie dedicated the new Fred B. Noe Craft Distillery to his dad who taught him the values of all James B. Beam family distillers. Those of craftsmanship, commitment and consistency.

Scroll back to the top
COME MEET US
The first family of bourbon welcomes you.

You must be of legal drinking age to enter.